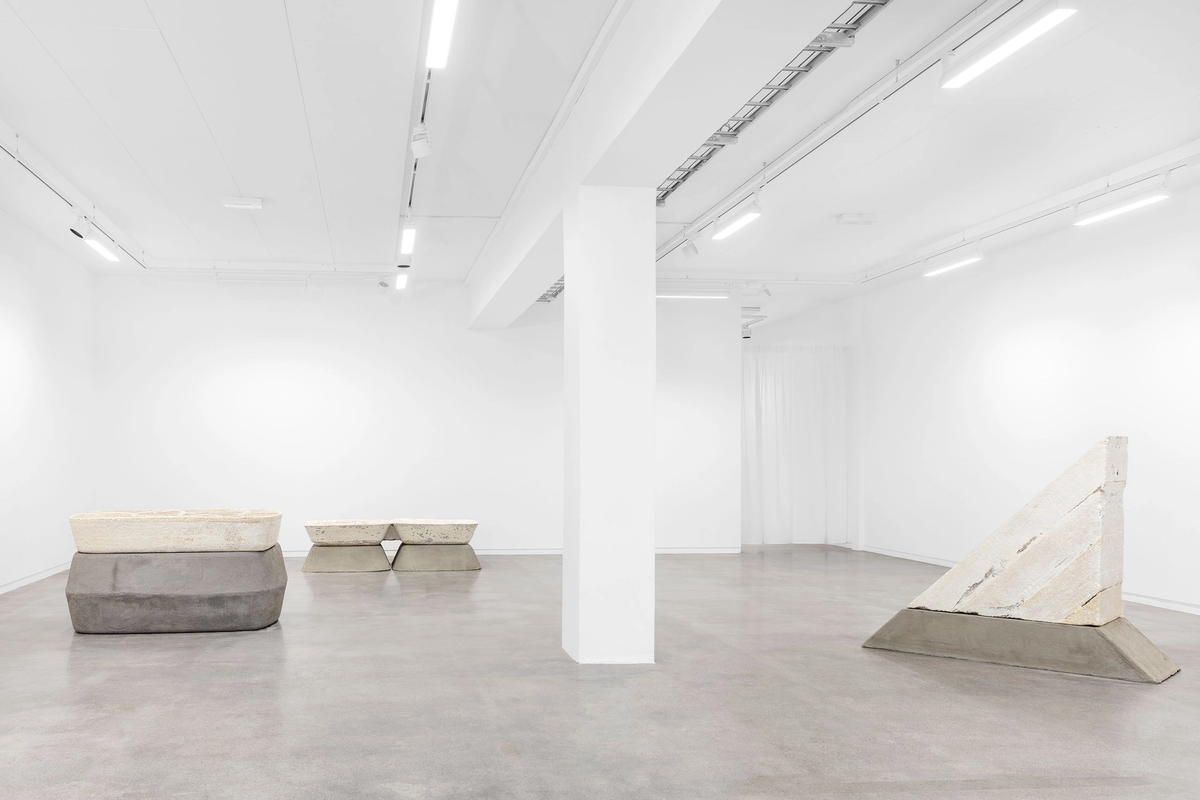 Welcome to the first exhibition of 2021 at Galleri Golsa by Johanne Hestvold . In this exhibition, her first solo show at the gallery, Hestvold shows her newest sculpture series *Eating at Conjunction*, on display from January 20th to February 21nd 2021.

Generic containers have become a staple of modern life. Deeply enmeshed with our cultural fabric in everything from take away coffee cups, fast food, slow food, make up, hunting equipment, toys, stereo equipment, and the list goes on and on. In a way, our contemporary life comes in boxes. A container is an object that stores or transports fluids or smaller objects, as such a container contains. It protects the inside from the outside and vice versa. It is a sort of boundary between something and something else, between liquid and surface, between objects, between matter. It demarcates where something ends and something else begins. Mundane containers and mass produced objects have for the last couple of years occupied the imagination of Johanne Hestvold. However, her new sculpture series, *Eating at Conjunction*, is closer to a study of the problem of relations rather than a contemplation on the nature of containing. Continuing to be fascinated by the container — a fascination originating in both a continuation of the study of the mundane and mass-produced, but also (or perhaps rather) a loyalty to form — Hestvold is now stepping further away from the concrete reality of mass produced consumer goods, and is moving closer to the concrete and abstract reality of boundaries.

*Eating at Conjunction* consists of a series of five sculptures mounted on top of concrete pedestals, with titles referencing a specific park and its cultural function. In a way she is inquiring into what a park contains, and how it is inevitably linked to eating. It was during an artist residence in Berlin in 2019, when Hestvold developed an interest in the disposition of parks and landscape design. The result of this interest emerges as a search for the historical, cultural and material formations and infrastructures of parks. Fundamentally, her works seem to explore the nature of parks, their history and materiality, as containers in their own right. The sculptures in *Eating at Conjunction* represent generic food containers, or more concretely, take away boxes and they embody maps of the park they are referencing. They are cast in a mix of Ganoderma, a living fungi that functions as the binder, and hemp shavings which is the material's aggregate. Unlike concrete which is also a composite (consisting of aggregate and a binder fluid) that cures in order to harden, the matrix forming the walls of Hestvold`s sculptures harden because the Ganoderma eats away at the hemp shavings. Technically speaking, the material is stabilised by making the Ganoderma inactive. Like yeast, certain temperatures or lack of humidity will cause a sort of hibernation, resulting in a quasi-stable mass; the walls of these sculptures can be “awakened” at any time.

In *Eating at Conjunction* Hestvold explores the potential of giving form to the relationship between things and ideas. This exhibition situates Hestvold within a contemporary discussion on complex relations, which is also an exploration of how something can be both concrete and abstract at the same time, and how materiality, like the mycelium composite, resists domination. *Eating at Conjunction* explores the possibility of exceeding dualisms through a material questioning of boundaries. The sculptures/containers attempt to create boundaries between the thing and the idea, between the growing and the static, the aggregating and the monumental, and between culture and nature. The large works are simultaneously active and inactive. Growing, shrinking. Consequently, the boundaries at play in the sculptures are not stable. They will eventually morph into something else in an open-ended process. *Excerpt from essay in artist book on Johanne Hestvold, by Malin Graesse. To be published in 2021. * *This exhibition is kindly supported by Kulturrådet and Vederlagsfondet. Thanks to Snøhetta for production assistance.*

Inquire about available works from the exhibition Eating at Conjunction