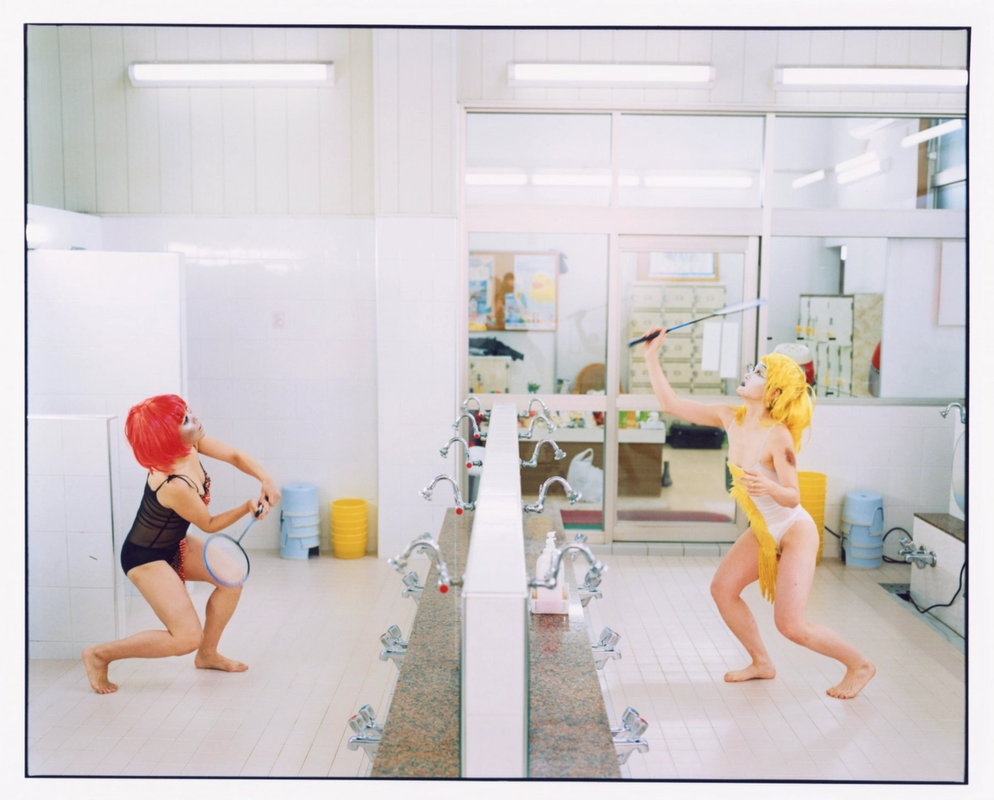 Galleri Golsa is proud to present a photographic installation by Motoko Ishibashi, Urara Tsuchiya, and Yuto Kudo for the photo festival, Oslo Negativ, at the old Deichman Library in Oslo (1933-2019). This series of works was first exhibited at V.O Curations in London, under the exhibition title “Assholes”, a solo exhibition by Motoko Ishibashi. Created in Tokyo and during her three-month residency at V.O, presenting a group of new paintings alongside a series of photographs made collaboratively with the artist, Urara Tsuchiya, and fashion photographer, Yuto Kudo.

They have created a multimedia installation comprising a series of photographs displayed unframed directly to the original walls of the back off house library. Created together with Tsuchiya and Kudo during the pandemic in Japan, the series of photos, ⾦泉湯 (Kin Sen Yu), takes the Japanese communal bathhouse, or sentō, as its focus. Dressed in mesh bodysuits and wearing wigs and face paint, Ishibashi and Tsuchiya are photographed performing various acts that defy conventional bathhouse etiquette. With the assistance of props such as fruits, vegetables, sake, and laptop computers, the two artists eat, imbibe, play, and role play. The photographs employ humor and drama as a way to both celebrate and destabilize the bathhouse as a traditional symbol of Japanese culture.

(b. 1979, Japan) practice explores the disconcertion that can be found between the personal and social worlds. Her work includes ceramics, performances, and videos. Her performances often incorporate costumes, installations, poetry, sound, and home cooking. These function as props in an alternate environment that make space for different behavior. She works with the boundaries of, for example, animal/human and adult/baby to strange and humorous effects. She is interested in challenging the viewer to negotiate his or her own personal and physical boundaries. Best known for her hand-painted ceramic bowls with explicit motifs, Urara also explores more complex and surrealistic ceramic sculptures. The sculptures present realistic objects such as suitcases, underwear, or toothbrushes, but with an explicit scenario such as a lamp that looks like a three with animals and naked humans climbing on it or a sauna with humans in sexual and intimate positions.

(b. 1983, Japan) works with fashion photography and editorials. He graduated from Nihon University College of Art, Department of Photography, and studied under photographer Hiroko Matsubara.

Inquire about available works from the exhibition Oslo Negativ